Yeah yeah I know, how very uncool of me to still watch Heroes, let alone pimp it. I recently saw Heroes in a list of "worst TV-shows still on" along with the most horrible reality-tv shows, and wth this volume does not deserve that. It's far from perfect, but it should be a crime that this volume, which is fairly decent, only has half the viewers the awful, awful volume three still had when it ended.

This is probably the biggest reason why I'm enjoying Heroes again. Last volume, everyone was emo! Claire was still whining about wanting to be normal, everyone seemed to hate their lives, the show just took itself waaaay too serious,...
But not anymore! Even though they're all in pretty bad places, they still have some fun, EVERYONE likes being able to use their powers, even Claire has seen the light! And the show seems to have made an effort to insert some humor without making anyone like a stupid 12-year old.

Finally, about 2 seasons too late, literally everyone is involved in the same storyline, fighting for or against the same goal. Okay, Sylar took a little boring detour, but he's in now too. There's still different B-plots for different characters every week, but all of them are connected to the overall story. Even Lyle was involved!

3. The awesomeness that is Sandra Bennet

Whoah. The third ep of this volume is pretty forgettable, but it is ENTIRELY worth it for seeing Sandra not putting up with HRG's bullshit anymore. And it just gets better from there on! She actually helps Claire being a Hero, and is all around amazing. Bonus points because she doesn't need powers for it, or didn't suddenly become a kick-ass ninja. She just helps in the ways she can.

Aww, my very first Heroes slash ship sails again:) Only for one episode really, but it was amazing, mmmkay. Just look at the smiles and the handporn.

Sweaty wrestling! Mohinder "sacrificing" himself for Matt! Hurt feelings of ~betrayal~! Now if only they could talk about Molly...

Yeah yeah, they're brothers. There's just no way Adrian&Milo/ the writers aren't doing this on purpose.

Feel free to be squicked out, I know I am. But again, no way they're not doing it on purpose. 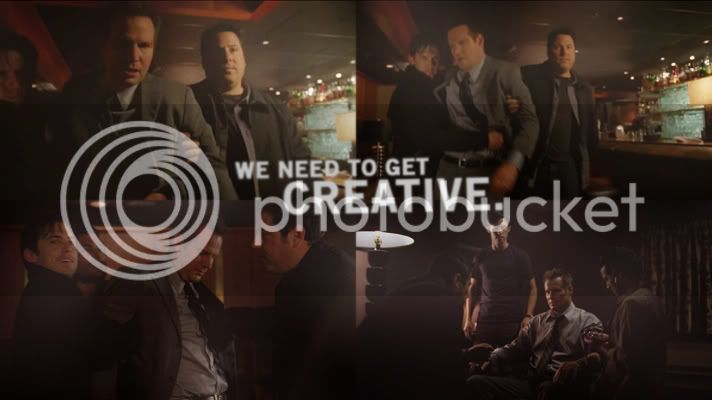 *random pretty cap of Mohinder that has nothing to do with the scene whatsoever*
This might just be me searching for something to put them in here. 'Cause making a list of Hoyay pairing in Heroes and not including Mylar is just not an option.

Remember that sweet, not-a-complete-idiot Peter from the beginning of S1? He seemed to have disappeared there for a couple seasons, but he's found again! The one and only good thing Volume 3 brought us, is the change in Peter's power. He can now only have 1 power at a time (and only gets them by touch), so he actually has to think about what power he needs. And he doesn't seem like a complete moron for not using one of his three billion powers in a time of crisis, because he doesn't have them anymore! Also, because he too is less emo now, he's really likable again.
And lickable. Milo's looking fiiiiine these days. /shallow

6. A show about People with powers, instead of Powers that people have

It's possible this is a side-effect of Peter not having every power in the book, but the powers are used sparingly and for a purpose. Not just to show off or make things worse. When people do use their power stupidly (ahem...Tracy?) they do get "punished" for it.
It also makes this volume feel "slower", like the writers don't feel like showing off every minute what they can do. I know some people find this volume boring for it, but I'm happy about it.

9. Next week: The return of Bryan Fuller
Technically, he returned last week as a consultive producer I think (and it showed!) but he actually wrote next week's episode. For those of you who don't know, he's the creator of Dead Like Me, Wonderfalls and Pushing Daisies and he worked on Heroes the first season, and wrote "Company Man'.
And he's writing for Tracy, who is in need of a good storyline. Mohinder seems to be featured heavily next week as well. PARTYYY.

In conclusion, it's back to being a silly, fun show with the occasional Great Moment instead of the MOST EPIC HOUR OF TELEVISION it was trying to be.